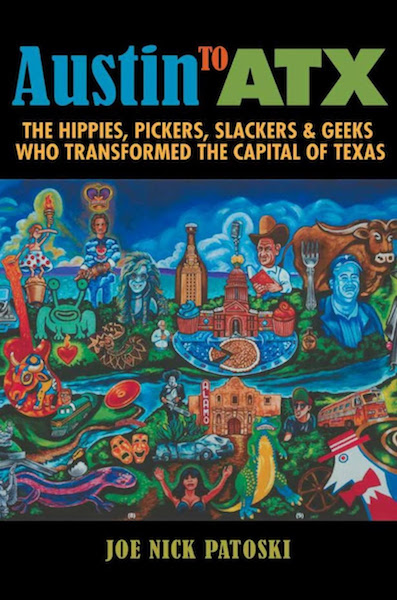 Thorne Dreyer’s guest on Rag Radio is writer Joe Nick Patoski, whose tenth book is Austin to ATX: The Hippies, Pickers, Slackers & Geeks Who Transformed the Capital of Texas. Patoski has been writing about Texas and Texans for more than four decades. A staff writer for Texas Monthly magazine for 18 years, and a reporter for the Austin American-Statesman, he has authored and co-authored biographies of Willie Nelson, Stevie Ray Vaughan, Selena, and the Dallas Cowboys, and collaborated with photographer Laurence Parent on books about the Texas Mountains, the Texas Coast, and Big Bend National Park. In Austin to ATX, his new gonzo history of the "City of the Violet Crown," Patoski chronicles the modern evolution of the quirky, bustling, funky, self-contradictory place known as Austin, Texas. Patoski describes the series of cosmic accidents that tossed together a mashup of outsiders, free spirits, thinkers, educators, writers, musicians, entrepreneurs, artists, and politicians who would foster the atmosphere, the vibe, the slightly off-kilter zeitgeist that allowed Austin to become the home of both Armadillo World Headquarters and Dell Technologies. He also discusses the loss of much of old Austin and what made it special -- and current efforts to try to Keep Austin Weird. Joe Nick Patoski lives near the village of Wimberley in the Texas Hill Country. Rag Radio is produced in the studios of KOOP 91.7-FM, an all-volunteer,  cooperatively-run, solar powered community radio station in Austin, Texas, in association with The Rag Blog and the New Journalism Project, a Texas 501(c)(3) nonprofit. It is streamed live on the Internet at KOOP.org and Radio Free America. The host and producer of Rag Radio, Thorne Dreyer, is a prominent Austin-based activist and writer who was a pioneer of the ’60s underground press movement. The show’s engineer and co-producer is Tracey Schulz and the staff photographer is Roger Baker; Suzy Shelor is Rag Radio associate; Alice Embree is guest host; Glenn Smith and Roy Casagranda are our political analysts, and Evan Hearn is the Rag Radio apprentice. The syndicated show is broadcast (and streamed) live Fridays, 2-3 p.m. Central) on KOOP, and is later rebroadcast and streamed on WFTE-FM in Mt. Cobb and Scranton, PA., on Houston Pacifica's KPFT HD-3 90.1, by KKRN, 88.5-FM in Round Mountain,  CA, and at WALHRadio.com in Wilmington, OH -- and as a featured podcast at Veterans Today. Learn more about Rag Radio here.